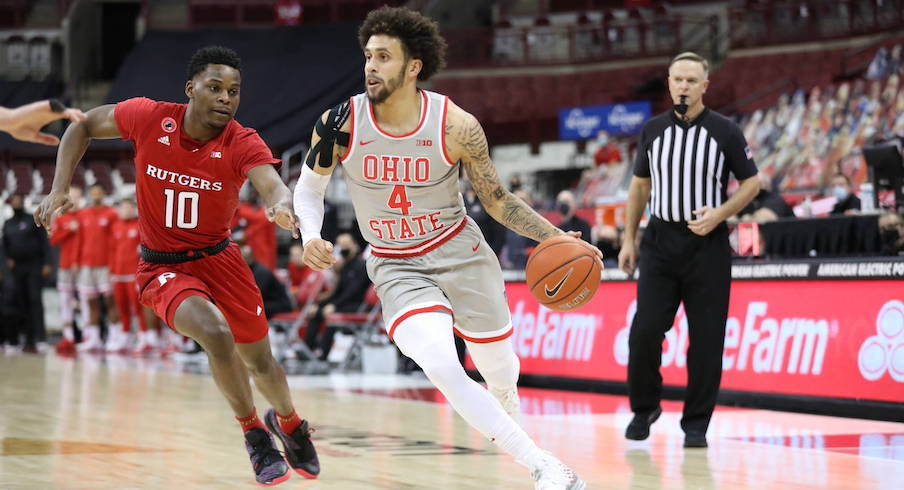 Back-to-back 3-pointer from Ron Harper Jr. put Rutgers ahead with 16.

With 15:38 left in Wednesday’s game at the Schottenstein Center and things slipping in the wrong direction, Ohio State appeared to be in danger of losing its second Big Ten game in a row to begin conference play. Then came three 3-pointers in two minutes from Duane Washington Jr., a couple of buckets from Seth Towns and EJ Liddell who got almost everything he wanted down.

By the eight-minute mark, Ohio State had cut the deficit to four points, and a Washington swimmer with four to five left tied it at 61 points apiece. The Rutgers were dealing with an impoverished front line due to injury and unfortunate problems, and they had few answers for the Buckeyes inside, pulling forward to an 80-68 victory.

Liddell, the key to victory, dropped a career-high 21 points while hitting eight of 14 shots from the floor. He also grabbed six boards. With him and Kyle Young – a career-high 17 points and 12 rebounds – on the inside, Ohio State did a good deal of its damage down. However, Washington’s three 3s from the second half paid dividends down the stretch. The junior guard managed a career-high 22 points by hitting four 3s and going 6 against 7 from the offense line.

Ohio State outscored the Rutgers 52-30 in the second half.

Harper, who came in on the day as number two in the Big Ten with 24 points per game. Match, Scarlet Knights led by 20 points. His team shot 41 percent from the field compared to Ohio State’s 47 percent shot.

Shortly after the tip-off, the Buckeyes pulled out to a 5-0 lead with a triple from Washington and a layup through contact by Young. However, it was the biggest Ohio State lead in the opening half.

Just a little over four minutes into the game, the Scarlet Knights pulled forward. And at the 10-minute mark, they grabbed a double-digit lead. A frontcourt by Liddell and Young, who together scored 16 of their team’s 28 points, kept Ohio State within striking distance, but the difference behind the arc was too much for the home team. Ron Harper Jr. and Geo Baker each drained a pair of 3-pointers in the first half, with the Rutgers combining to go 7-of-13 from outside in the first 20 minutes. The Buckeyes, meanwhile, went only 1 to 10 on the first half try from 3.

They went into the semi-finals 38-28 with the 3-point difference that stands out among everything else.

Next up: Ohio State travels to Northwestern to drive on December 26th. The game overturns at 14 on Fox Sports 1.