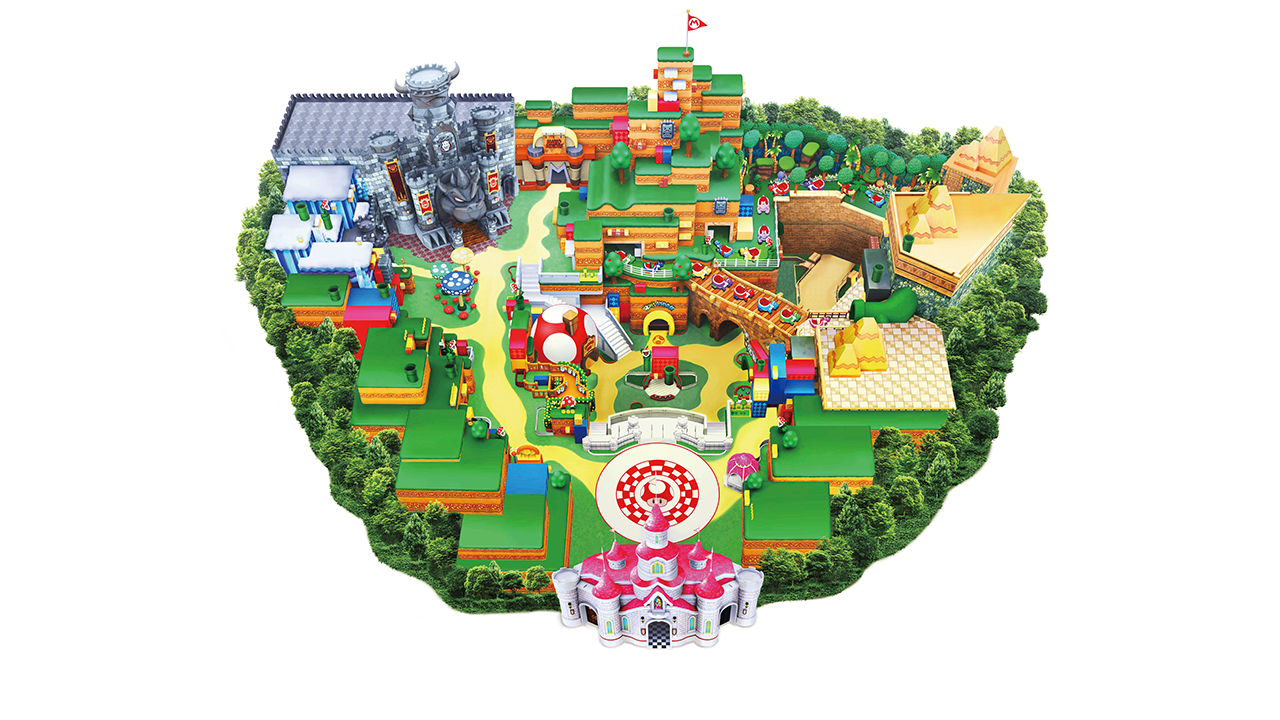 Universal Studios Japan has released an area map for its upcoming Super Nintendo World area themed around characters from Mario games and their universe of spinoffs. As of today, the park has encouraged select Club Universal members and annual pass holders to experience the new area for the first time before opening February 4, 2021.

Super Nintendo World is the most complex area at USJ to date. We had already seen glimpses of Mario Kart: Koopas Challenge and Yoshi’s Adventure rides (and IGN Japan previously released a video showing the inside of Bowsers Castle); now USJ has shared some details in the menu at Kinopio Cafe (Kinopio is the Japanese name for Toad), which includes a Bacon & Cheese Mario Burger, Piranha Plant Caprese and Question Block Tiramisu. Merchandise sold in the 1Up Factory Shop includes Mario hoodies, mustache glasses and gloves, as well as the cute Tokotoko Mario toy shown by Nintendo’s Shigeru Miyamoto during his video tour of the park released last weekend. See the pictures of some of the dishes and items below.

Have you played Super Mario Bros.?

In addition to the great facilities and attractions, there will be activities where guests can collect virtual coins and play against enemy characters using a Power Up Band (3,200 yen including tax or around $ 31 / £ 23) that can be linked to a smartphone -app. These will include activities and challenges if Japanese names are translated into “Goals! Koopa Troopa POW Block Punch ”and“ Stop! Piranha alarm panic ”.

There will also be a Meet & Greet photo spot where visitors can meet Mario and Luigi, take photos with them and even engage them in conversation.

Japanese superstar YouTuber Hikakin was named a partner for USJ, and he has posted a sponsored video of his experience at Super Nintendo World on his channel, showing a little more detail.

Universal Studios Japan is located in Osaka, Japan. Super Mario World was originally scheduled to open last summer, but was delayed to the current February 4, 2021 opening date in light of the COVID-19 pandemic. Japan does not currently provide access to foreign tourists for the time being, so Nintendo fans outside of Japan will have to wait before they can visit – though a Super Nintendo World site will eventually be added to Universal Studios theme parks in Hollywood, Florida and Singapore.

For more information on USJ’s partnership with Nintendo, see our report from Mario Cafe & Store in the park’s main area, which is already open, selling specially designed exclusive snacks and themed items to Mario and friends; and a look around Bowser’s Castle and a sneak peek at Mario Kart: Koopa’s Challenge Tour.

Daniel Robson is the Editor-in-Chief of IGN Japan. Follow him on Twitter for all your Japanese game theme parks tokotoko needs.