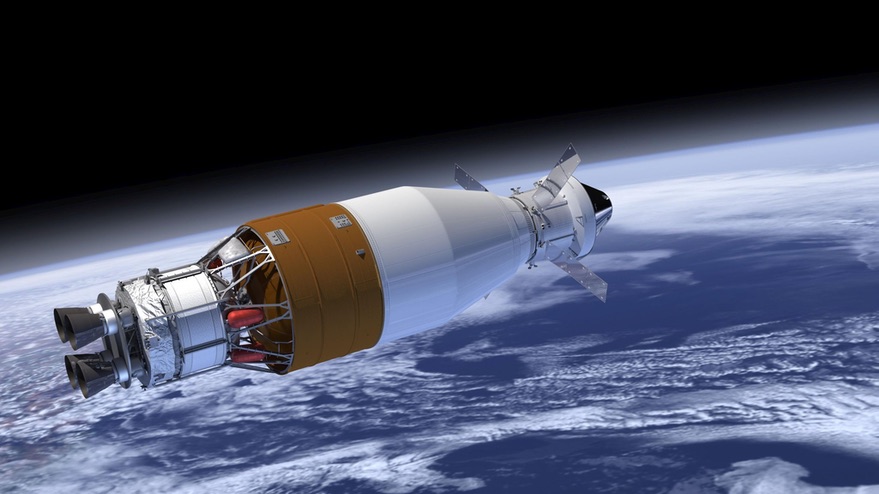 Boeing announced on December 21 that the SLS Exploration Upper Stage (EUS) had completed a critical design review with NASA. This review confirmed the design of the EUS, which enabled Boeing to continue the development of the stage, including hardware manufacturing.

EUS will be used on the Block 1B variant of the SLS, replacing the temporary cryogenic propulsion phase (ICPS) used on the original Block 1 version of the SLS and based on the Delta 4 upper stage. EUS will have larger tanks and use four Aerojet Rocketdyne RL10 engines.

Block 1B will offer increased performance compared to Block 1. While Block 1 can place 27 metric tons on a translunar injection path, SLS Block 1B will increase this performance to 38 tons. It will enable SLS Block 1B missions launching Orion spacecraft to transport additional “co-manifested” payloads, such as components for the Lunar Gateway.

“The EUS was designed for manned flights from the start, and the extra lift capacity that comes with the EUS requires fewer flights to enable a sustained human presence in deep spaces faster and safer,” said Steve Snell, EUS Program Manager at Boeing. in a statement.

However, the Block 1B version of the SLS will not fly until the mid-2020s. The first three SLS missions will be of the Block 1 variant and use ICPS. This would push the SLS Block 1B debut beyond 2024 depending on any changes to the schedule of Artemis missions and the potential use of the SLS to launch the Europa Clipper.

Without a short-term need for the EUS, NASA sought to slow down its development. Its budget request for budget year 2021 proposed that the final design work on SLS block 1B be postponed. While the SLS Block 1B configuration with Exploration Upper Stage (EUS) remains an important future capability, the significant performance and cost challenges facing NASA’s main contractor, Boeing, in the completion of the Block 1 core phase, require NASA and its contractors are concentrating in the short term on the successful completion of the Block 1 SLS and the reliable manufacture of aircraft systems, ”the draft budget states.

However, Congress has continued to provide funding to the EUS. Financial year 2021 bill for omnibus spending, passed by Congress on December 21, instructed NASA to spend at least $ 400 million on the development of Block 1B, “including Exploration Upper Stage and associated systems including related facilitation, to support an SLS Block 1B mission available for launch in 2025 in addition to the planned Block 1 missions for Artemis 1 through Artemis 3. ”

A NASA approval bill approved by unanimous consent of the Senate on December 18 went even further, instructing NASA to continue “the development of the top phase of the investigation into the space launch system with a planned availability sufficient for use at the third launch of the space launch system. . “The bill will not be taken up by Parliament in this Congress, but its supporters in the Senate see it as a starting point for a new NASA approval proposal next year.

Meanwhile, testing of the core stage for the first SLS mission in the Stennis Space Center continues. NASA said it conducted a wet general test at the SLS core stage there on Dec. 20 and filled it with liquid hydrogen and liquid oxygen propellants. This is the penultimate test of the overall Green Run test campaign, with the final test a full-duration static fire test of the scene’s four RS-25 engines.

NASA halted an earlier attempt at the wet test on December 7, when liquid oxygen flowing into the core stage was at slightly higher temperatures than required. NASA said they would make changes to test procedures rather than at the scene itself to correct the problem.

“First look at the data indicates that the scene worked well during the propulsion filling and refilling process,” NASA said, noting that the practice countdown, which was to stop 33 seconds before ignition, instead stopped a “few minutes” less than that. “The team is evaluating data to find out the exact cause of the early shutdown,” NASA said in a brief statement, noting that the problem did not appear to be with the core phase itself.