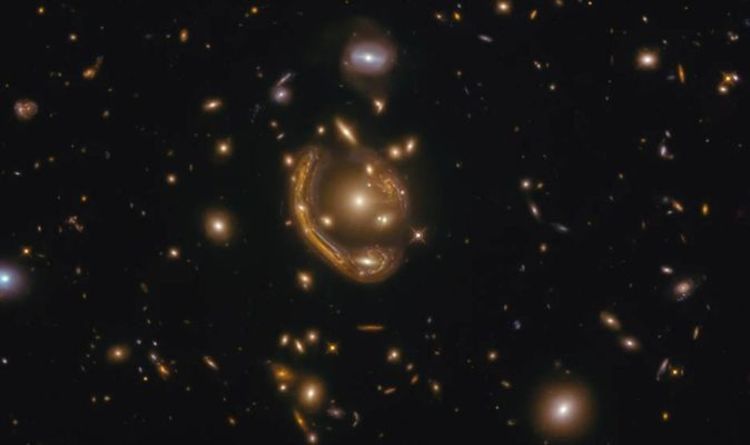 A distant galaxy is seen curving around a giant star in what NASA describes as a “molten ring”, otherwise known as an Einstein ring. The object in question has been described as a “very rare phenomenon” by the space organization. The Hubble Space Telescope managed to snatch the object, which has the catchy name GAL-CLUS-022058s.

According to NASA, the image shows a distant galaxy curved around a cluster galaxy.

It is caused by a phenomenon known as gravity lens.

If an object in space is massive enough, such as the sun, its gravitational field would be so intense that its mass could twist the fabric of space – space-time – and cause light to bend.

It works in the same way as a magnifying glass, which, for example, bends light through the lens and makes an object look closer.

Gravitational lenses were first theorized by Albert Einstein in his general theory of relativity.

Because of its fiery appearance, NASA has called this a “molten ring”.

The space agency said: “In this case, the light from the background galaxy has been distorted in the curve, as we see by the gravity of the galaxy cluster sitting in front of it.

JWST is so powerful that it can offer an insight into the early universe, only 0.3 billion years after the Big Bang, to the time when visible light itself began to form.

JWST will also play an important role in the hunt for aliens.

This is because the telescope has the ability to scan thousands of planets for alien life by looking for biosignatures in the atmosphere of a planet.

NASA has said: “The James Webb Space Telescope (sometimes called the JWST or Webb) is an orbiting infrared observatory that will complement and expand the discoveries of the Hubble Space Telescope with longer wavelength coverage and greatly improved sensitivity.

“The longer wavelengths allow Webb to look much closer to the beginning of time and hunt for the unobserved formation of the first galaxies, as well as to look into dust clouds where stars and planetary systems are forming today.”