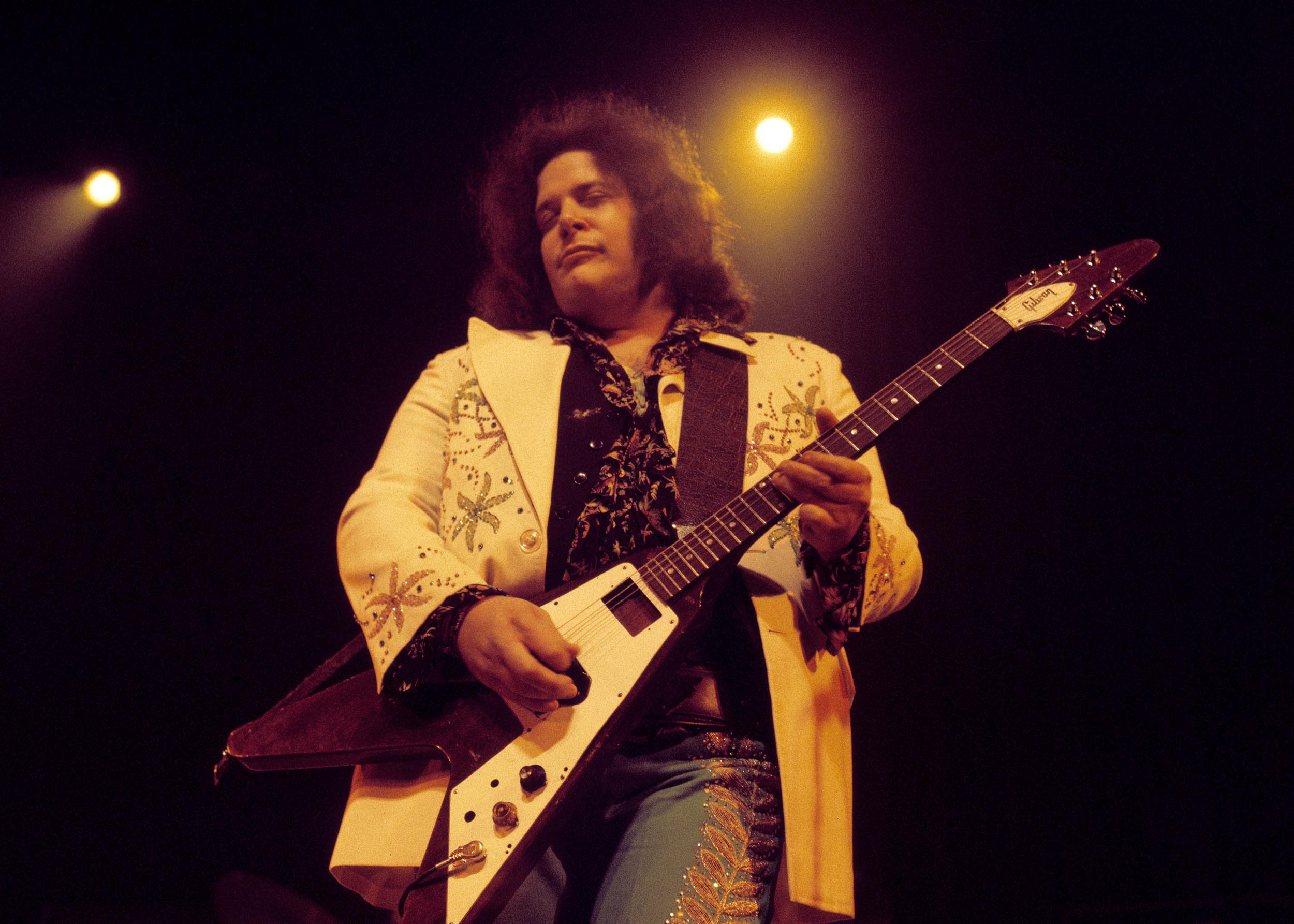 Leslie West, the towering guitarist who created the hard rock milestone “Mississippi Queen” with her band Mountain, died Wednesday morning. West’s brother, Larry West Weinstein, confirmed the musician’s death for Rolling stones. He was 75. The cause of death was cardiac arrest. On Monday, West was rushed to a hospital after suffering a cardiac arrest at his home near Daytona, where he never regained consciousness.

Released in 1970 on Mountain’s debut album, Climbing!, “Mississippi Queen” was two and a half minutes of noisy bliss built around West’s burly yowl and guitar blasts and drummer Corky Laing’s completely unironic cowbell. One of the never-say-die songs from the classic rock era, “Mississippi Queen”, has been featured in countless soundtracks, TV shows (The Americans, The Simpsons) and in Guitar Hero III. In an interview with Guitar player Earlier this year, West said the song “has everything you need to make it a winner. You have the cowbell, the riff is pretty damn good, and it sounds incredible. It feels like it will jump out of your car radio. To me, it sounds like a big, thick milkshake. It is rich and chocolatey. Who does not love it? ”

A contemporary of Eric Clapton, Jimmy Page and Jimi Hendrix, West was respected for his versatile playing (from fingertips to metallic power chords) and was honored by a new generation of guitarists who followed. In 2011, Eddie Van Halen told Rolling stones that West and Deep Purple’s Ritchie Blackmore were among his biggest influences: “Leslie West has this incredible tone in Mountain,” Van Halen said.

Born Leslie Weinstein on October 22, 1945, West grew up in the New York area – Manhattan, Long Island and Forest Hills, Queens – and was one of the founders of Vagrants, a blue-eyed soul garage band in the mid-sixties. The band (which also included his brother Larry on bass) scored two minor hits, “I Can’t Make a Friend” and a cover of Otis Redding’s “Respect” (released just before Aretha Franklin’s titanic version), before West left the band. . A turning point, he once said, was watching Cream at the Village Theater (later Fillmore East) in 1967. “My brother said to me, ‘Let’s take some acid before we go,'” West told the Blues Rock Review in 2015. . ”So we took LSD, and suddenly the curtain opens and I hear them play ‘Sunshine of Your Love’, and I see Eric Clapton and his buckskin jacket. I said, ‘Oh my God, we really suck.’ Then I really started practicing and practicing. ”

With the help of Cream producer and bassist Felix Pappalardi, who met West when he was producing Vagrants, West made a solo album, mountain. Mountain also became the name of the band the two men formed – “because I was so cool!” West joked later.

West was known for electric shock white blues riffing, but could also play more fluid melodic lines (as heard in Mountain’s “Nantucket Sleighride” and his solo in their “Theme from an Imaginary Western”). “What impressed me most when I started was how to identify with Clapton his sound as a signature,” West told LA Times in 1990. ”I wanted a sound that you could identify like that. I was never a fast player. I tried to take advantage of my vibrato. I hope I’m considered a melodic guitarist, not someone up there who goes ‘weinie, weinie’ all night long. ”

When Cream disbanded in 1968, a new generation of even more muscular guitar-based bands was ready to continue where they left off. The mountain threatened particularly large and not only because of West’s voluminous size and frizzy hair. Reviewing an early Mountain show, one critic described him as a “300 pounds dressed in blue velvet, suede and snakeskin.”

The original incarnation of Mountain took on a high-profile appearance at the Woodstock Festival – the second day between Canned Heat and Grateful Dead. “I think I had the most amplifiers of anyone there,” West said Rolling stones in 1989. ”It was paralyzing because the stage, this setting, was a kind of natural amphitheater. The sound was so loud and shocking that I got scared. But when I first started playing, I just kept going because I was afraid to stop. West also contributed some unreleased parts to Who’s Who’s next?

Although Mountain gained a large following, the group broke up in 1972. He took his Cream roots to a new level and formed West a Cream-style power trio with Mountain drummer Corky Laing and Creams Jack Bruce. The group released three albums and sold out New York’s Carnegie Hall, but in 1974 West Mountain reformed for two more records.

The following year, West formally went it alone with his album The great Fatsby, a musically varied album that showcased softer sides of his style and also in the title bumped into his weight problems. The album featured “High Roller”, co-written by West with Mick Jagger and Keith Richards; Jagger also played guitar on the track. The album could not lift West to a star solo act, and over the next few decades he switched between solo album and touring and recording with different versions of Mountain.

West’s health had been a problem for many years. In the mid-seventies, he moved to Milwaukee to kick heroin habits. In a 1990 interview, he said it had been 10 years since he “had stopped fooling around with drugs.” In the mid-eighties, he was diagnosed with diabetes – his lower right leg was amputated due to complications from the disease – and immediately lost 85 pounds and dropped to 200. But his weight fluctuated over the years.

In the years that followed, West continued to work: he was a regular on Howard Stern’s radio show, recording solo records and taking a few sticks by shopping, including in 1986. Pengegropen. Mountain went back and forth with various lineups, and the band released an album featuring Bob Dylan covers, Masters of War, in 2007; Ozzy Osbourne sang lead on the title remake. Attests to West’s stature, his 2011 album The unusual suspects including contributions from Slash, Billy Gibbons and Zakk Wylde and West’s latest album, Soundcheck, highlighted Peter Frampton.

Aside from “Mississippi Queen,” “Long Red,” a piece of psychedelic blues from his album Mountain, remains one of West’s enduring legacies. The song has been sampled by several rap acts, including De La Soul, The Game, ASAP Rocky and especially Kanye West in “The Glory” and Jay-Z in “99 Problems.” “There was something about the song that appealed to rappers,” guitarist Blues Blast told magazine in 2015. “I have six different platinum albums on my wall from all these different guys trying on my stuff. When I wrote that song in 1969, there was no hip-hop. It just so happens that the song has a hip-hop beat. West’s legacy, however, extends far beyond hip-hop; Several bands have covered his material, most recently Dave Grohl and Greg Kurstin recreated “Mississippi Queen” earlier this month for their “Hanukkah Sessions.”

West, who had moved to Florida last month, is left by his wife Jenni Maurer; the couple got married on stage at a 40th anniversary concert in Woodstock in 2009. Of his own mix of blues and metal, West told The Morning Call in 2000: “It’s like being a chef. You may be using the same ingredients as everyone else, but that’s how you put them together. You end up with your own style. ”