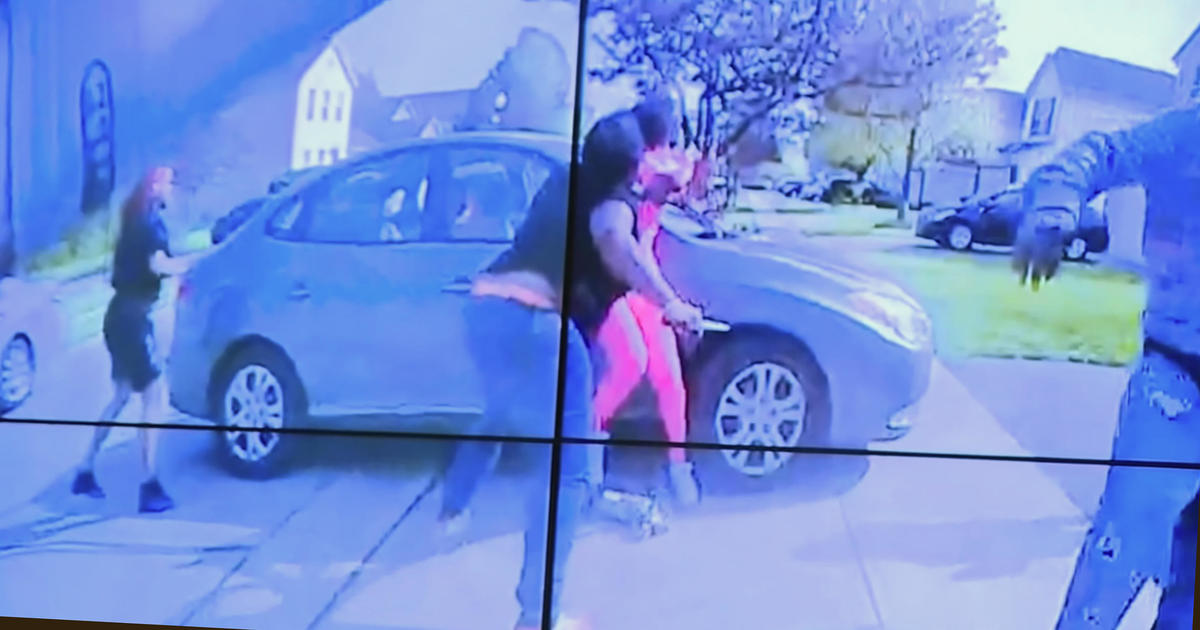 Editor’s note: The video to which this story links is disturbing.

Columbus police on Wednesday released more bodycam video of the fatal shooting of black teenager Ma’Khia Bryant the day before. Protesters marched to the streets of the Ohio capital for another straight day and night.

Protesters gathered in the afternoon and did not thin out late Wednesday night, CBS Columbus-affiliated WBNS-TV reports. Hundreds marched past or stopped at Statehouse, Ohio Supreme Court and police headquarters among other places, the station said.

Police initially released some body camera footage from the shooting Tuesday night. They released the additional footage along with two 911 calls at a news conference Wednesday, citing “the public’s need, desire and expectation of transparency.”

Interim Police Chief Michael Woods said Wednesday that dispatchers first received a call for help at 6 p.m. 16:32. During the call, a woman told officers that people were trying to fight and stab her and others, according to an audio recording played during the press conference. Another 911 caller also asked police to respond to the scene, but the call ended quickly after the person realized the police had just arrived.

Officers arrived at the scene at 16.44, Woods said. A declining version of body camera footage appears to show Bryant attacking two other people and jumping on one with something in his hand, right after an officer arrived. The officer, identified by Woods as Reardon, fired his weapon several times while Bryant and another girl fought to the side of a parked car. A knife could be seen next to Bryant’s body after the shooting.

It was unclear what led to the altercation, which was already underway when the officers arrived.

Bryant’s family told WBNS-TV that Bryant was the one who called police for help and said people were fighting outside her house. Woods declined to comment on who called 911.

Woods said the Ohio Bureau of Criminal Investigation is investigating the shooting. Once the agency completes its investigation, “the divisional police will conduct an administrative review of the actions of this officer and all officers on the scene,” Woods said.

The officer who killed Bryant will be “taken off the street” while the shooting is being investigated, Woods said. He also said a decision on whether the officer violated a policy comes after the criminal investigation is completed and sent to a grand jury.

“It’s a tragedy. There’s no other way to say it,” Woods said. “It’s a 16-year-old girl. I’m a father, her family mourns. Whatever the circumstances associated with this, a teenage girl lost her life yesterday.”

Columbus Mayor Andrew Ginther called the shooting a “horrific, heartbreaking situation” and said, “We know from this footage that the officer took action to protect another young girl in the community.”

Woods said that “lethal force can be used to protect yourself or (to) the protection of a third person … Whether this is in line with that will be part of the investigation.”

“We think it’s critically important to share as much information as possible as quickly as possible,” Ginther said. “So we continue to share footage, other information in the coming hours and days.”

The mayor also asked someone with more information about what happened before the shooting “to share this information with the relevant authorities.”

“My daughter sent the Columbus police to protect it, not to be a homicide today,” Paula said with tears in her eyes.

Ma’Khia was in a nursing home, she said.

Director of Public Safety Ned Pettus Jr. said Wednesday he understands the anger Bryant’s family feels. “A teenage girl is dead and she’s dead at the hands of a police officer,” Pettus said. “In any case, it’s a terrible tragedy.”

But Pettus warned that “the video shows that there is more to this. It requires us to pause, take a closer look at the course of events.”

“We have to ask ourselves: What information did the officer have? What did he see? How much time did he have to assess the situation?” Said Pettus. “And what would have happened if he had not taken anything at all?”