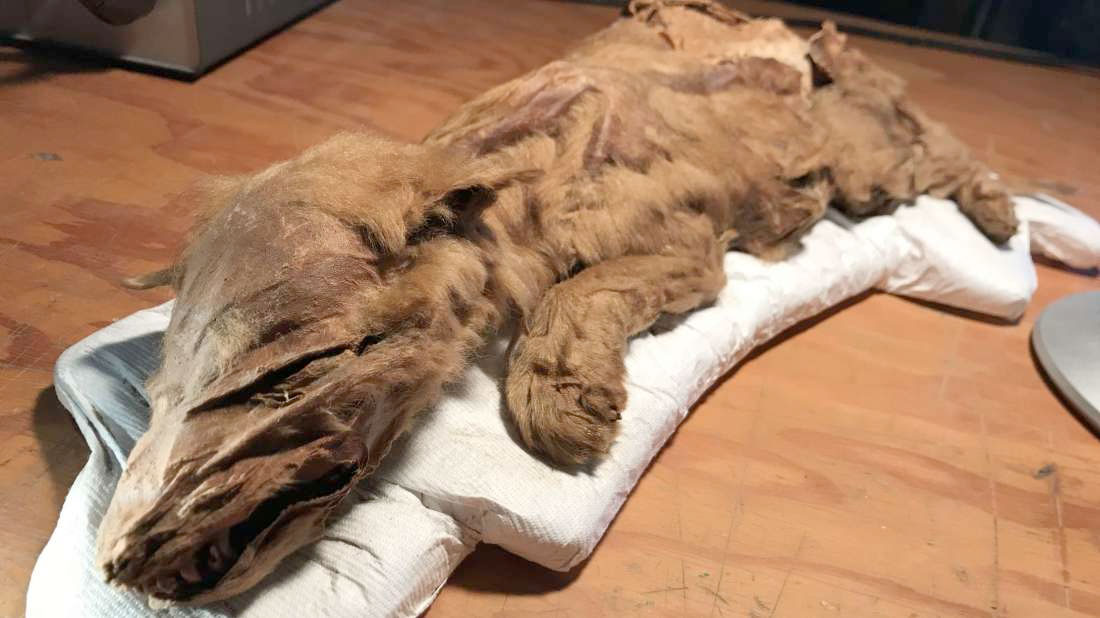 A new study has revealed intriguing information about a mummified wolf cub found in the Canadian permafrost. Scientists say the little creature discovered by Yukon miners is “the most complete wolf mummy known.” They have been studying this excellent sample for a few years now and have finally announced details on various aspects of the kid’s life, including her age, diet and the probable cause of her death.

The story of the wolf cub made headlines in 2018, announcing that the cub and a caribou calf were both discovered by miners searching for gold in the Yukon. The discovery of the two animals from the ice age in such great condition is rare, and it has thrilled researchers and the local community. The mummified remains are important as they can help scientists better understand the animals’ lives during the ice age and the conditions in the environment tens of thousands of years ago.

This picture shows the wolf cub when she was found. (Yukon Government)

New insight into the wolf cub’s life and death

Now a new study has been published in the journal Current biology declares that the wolf cub is female and has been named Zhur, meaning ‘wolf’, by the local Tr’ondek Hwech’in people. DNA analysis and X-ray data have revealed many aspects of the wolf cub’s life. For example, scientists have discovered that Zhur lived and died between 56,000 and 57,000 years ago. The wolf cub is related to ancient Beringian and Russian gray wolves, and she died when she was about 7 weeks old.

Professor Julie Meachen, a paleontologist and professor of anatomy at Des Moines University in Iowa, also told reporters how the young wolf cub died, saying “We think she was in her cave and died instantly in a hole collapse. Our data showed that she was not starving and was about 7 weeks old when she died, so we feel a little better knowing that the poor little girl did not suffer for too long. ”

In their research, the researchers discovered what Zhur also ate, and it was something of a surprise. “Usually when you think of wolves in the ice age, you think of those who eat bison or musk oxen or other large animals on land,” Meachen said, “One thing that surprised us was that she ate water resources, especially salmon.”

An X-ray of the mummified wolf cub. (Yukon Government)

Mummified animals in the permafrost

In areas beyond the Arctic Circle, there have been numerous discoveries of mummified remains of extinct and extant animal species from the ancient past. In Siberia, there have been exciting finds of mummified animals in the permafrost. In August 2018, an almost complete 40,000-year-old foal was discovered in the Yakutia region of Siberia, which is known for such discoveries. The remains can be almost perfectly preserved due to the extreme Arctic conditions that freeze the dead animals, slowing down or even stopping the natural decay processes.

The foal found in the Batagai crater Yakutia in 2018. (Image: The Siberian Times )

The Yukon, a northwestern Canadian territory, is famous for the Klondike Gold Rush in the late nineteenth century. Today, the area is dominated by large, dense forests, but in the past it was part of the desolate tundra of Beringia. Here, extinct animals, such as woolly camels and mammoths, lived with the ancestors of existing mammals such as reindeer, which now live in the Yukon.

The discovery of the aforementioned caribou calf was made by some miners who continue to extract gold in the Yukon long after the completion of the Klondike Gold Rush. The mummy was found in June 2016 in a gold mining region owned by a well-known Canadian reality TV star. The caribou was found at the ‘site of an 80,000-year-old volcanic ash bed’, according to USA Today.

In July 2016, the wolf puppy was also spotted by another gold miner working in the area. Both were very well preserved, and according to Smithsonian.com, ‘both animals’ fur, skin and muscles are almost perfectly preserved.’ Due to their remarkable condition, these offer some of the oldest specimens of mummified soft tissue in mammals in the world.

The wolf cub and the Caribou calf

The wolf cub is the better preserved of the two ice age creatures, and even its fur is in relatively good condition. The caribou’s condition is not so good, but its head, upper body and forelegs are complete, and according to Smithsonian.com ‘it provides a unique example of mummified animal skin, muscle and hair.’

The two samples were removed from the ground, and researchers performed a series of tests on the mummified remains. Carbon dating revealed that the reindeer probably lived earlier than the wolf puppy. These make them the earliest specimens ever uncovered in an Arctic region.

Animals from the ice

This is also not the first significant finding in the Canadian permafrost. About 30 years ago, two miners found the incomplete mummified remains of a long extinct horse species known as the Yukon Horse. However, the discovery of the reindeer and the wolf puppy is very important as they are the oldest soft tissue specimens that have been found in Canada. Now Canadians have samples that can compete with anything found in Yakutia in Siberia.

In 1993, Sam Olynyk, Lee Olynyk, and Ron Toewes found at Last Chance Creek near Dawson City, the then most complete and best-preserved specimen of a mummified extinct animal in Canada, the Equus lambei or the Yukon horse. ( CC BY-NC 2.0)

The importance of the findings

Finding the reindeer and the wolf cub is really important. Tests on the mummified animals are expected to ‘help researchers learn more about the ancient mammalian species that roamed Beringia,’ said Tourism and Culture Minister Jeanie Dendys, according to a Yukon government press release. Premiere Sandy Silver further praised the find program:

“These world-class discoveries shed light on the Yukon’s fascinating ice age history and will help us understand how these long-gone creatures lived in the environment they inhabited.”

Both the wolf pup and the reindeer are ‘very important and interconnected’ for First Nation residents Tr’ondëk Hwëch’in. Chief Roberta Joseph said:

“The caribou has fed and clothed our people for thousands of years. The wolf maintains balance in the natural world and keeps the caribou healthy. These were an amazing find and it is an amazing opportunity to collaborate with the Yukon government and our community partners. ”

The local Tr’ondëk Hwëch’in people agree to place Zhur and the reindeer cub on display at the Yukon Beringia Interpretation Center in Whitehorse. Especially Zhur is so ‘clean and preserved’ that EurekAlert! reports “she will remain intact for many years to come so she can travel to other Yukon locations as well.”